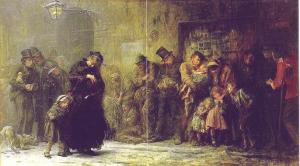 May the Lord preserve me from such troublesome times!

Yesterday, I witnessed a scene of such distress and violence that I hardly think those involved were human. I saw Villiers leave from the servants’ outside door and go striding down the street as though he were being chased by bears – I followed, but could hardly keep up with his route, since I had left the house in a degree of haste and had not had time to have my boots laced. I was wearing my house shoes, which could never be described as robust even by the man who made them.

I hobbled along in Villiers’ wake, not caring to notice where we were going, until we arrived at a corner I recognised. My heart turned as I saw that we were in the vicinity of Brunswick Square, our winter residence last year, and at the very spot where I had seen the Girl and her child from my window!

I rested a while, easing my poor feet, while Villiers marched out of sight. I wanted nothing more than to go home and spend a quiet morning with Dauncey but I felt compelled to see what it was that Josiah had told him to do – what task had so angered him – so after a few minutes I continued my steps.

As I reached the turn I had seen him take, I beheld a sight I could never have conjured up in the most frenzied ravings of the hottest fever. Villiers was standing at the top of a flight of steps, with his arms akimbo across the front door of a drab-looking but respectable house. At the foot of those steps was a heap of rags and baggage – and the prone figure of the Girl.

I walked a little further towards this scene, but was too afraid to make my presence known. I had not the faintest notion of what was happening, save for the obvious. Villiers was preventing the Girl from entering the house. But why?

“Mr Villiers, I am begging you – please do not do this to us. What am I to do – where will we go?” She was crying, and scraping the ground to collect her belongings together. “All I asked for was what is due to Jojo and me. Please, Mr Villiers, you know my situation – surely you can take pity on me and the boy?” I could now make out that part of what I had thought was just rags was actually a small child. The child was silent, staring intently at the Girl but otherwise showing nothing of what he felt.

Villiers began to lock the door and descend the steps. He had not spoken at all whilst I had been watching but now, quietly, he addressed the Girl.

“I have no choice, none at all,” he said “You must make your way to the gentleman you are to marry and trust that he will give you shelter. I shall call for a carriage to take you to wherever he is – that is more than I need to do, but I am sorry for you.” He put the house keys into his pocket and glanced around for someone he could send to find transport. That is when he saw me.

As our eyes met I could hide my presence no longer so I approached – as I did so, the Girl followed Villiers’ gaze and as she saw me she screamed,

“You! You have come here to watch me in my destitution! Mrs Hatherwick, I have served you well, I do not deserve for you to gloat over my misfortune.” She looked at Villiers as if to accuse him of double duplicity – evicting her from her home and inviting me to be the witness of her downfall.

I was about to dispute the notion that she had been a good servant – she had in truth been sullen and tearful throughout her time in service with us. But seeing her evident distress and shame, I felt it would be wrong to take her to task for her delusion. I said nothing, but I walked forward and gestured that I would help her stand if she would give me her hand. It is always better to be magnanimous towards subordinates, I have found – it costs little and cuts their whining short.

“Madam,” Villiers addressed me with a strength not usually to be found in him, “I do not know why you are here. I can hardly think this scene is one you will enjoy – it is best you return to Sydney Walk forthwith.”

“Thank you for your concern, Villiers, but I am perfectly capable of deciding my own actions. I wish to know why you are preventing them from enetering their home.” The Girl began to cry again at this, and started raving at us both.

“It is not my home any more, you have seen to that! I have no home! Go away both of you, we do not need you or your charity – I only want what I am owed!”

“But what of the gentleman who lived here with you?,” I asked her, “The friend of my husband for whom you were working – is he dead?” Perhaps my instinct had been right after all.

The moment I asked that question, the Girl shouted a great scornful sneer, while Villiers ran to her with his hands outstretched, as if to stifle her mouth.

“Ha! Dead? He is as good as dead, Ma’am,” she scoffed, “At least he is dead to me and this poor boy!” She picked up the child, who clung to her but still made no sound.

“Madam, please turn and go back at once. There is really no cause for you to remain here,” said Villiers. He turned back to the girl and passed some money into her pockets. “Take what I am giving you here and go to your intended – go now.” He seemed not a little affected by the scene and was clearly fighting to control himself – he did not squeak, or flap, or perform any of his usual dances when agitated. It occurred to me that I had never seen him so controlled.

The Girl counted the money Villiers had given her, then collected her belongings and set off away from us, carrying that silent boy on her hip.

Villiers’ face was a picture of torment as he moved towards me with a sweeping gesture, as if to wipe the previous fifteen minutes from memory. I walked ahead of him, not wishing for his company.

I had for some years come to hold Villiers in high regard but this morning had begun to shed light on some of his behaviour that had been of concern to me. As I walked back to our rooms, I began to make sense of it.

The conclusion I arrived at was shocking to me.

He is often out of the house at night – all night – something which none of the other servants were wont to do. After the Girl first left our employ, he would smirk and giggle whenever she was mentioned as if he knew something about her that I did not. His lack of concern for LB when he was charged with protecting him.

Villiers had got the Girl with child back at Blindingham. He had caused her to be dismissed and set her up in an apartment in London – where he had been living with her as man and wife! And now she has betrayed him with another man – a man she is free to marry – so Villiers has cast her out in a fit of jealousy.

His argument with Josiah can only have been because Josiah wished Villiers to take the Girl the money she had asked from him and Villiers thought she was not deserving of it.

How could I not have seen this before? How could all this have gone on under my roof and left me in all ignorance?

Read Effie's diary from the start and then click the link at the bottom of each entry to follow the story in chronological order.
What city, friends, is this?