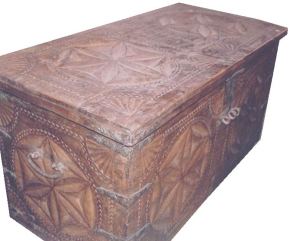 It would seem that I have more in common with the Cornbenches than I thought.

Having returned home last week under the distinct impression that they had pity for me, I could not shake from my head the need to explain our ‘situation’ further. Quite why their opinion of me should matter I do not fully understand, but I wandered the Hall all the next day composing a speech giving my reasons for housing Cook in her hour of need. Surely they would not expect me to abandon her for ever in that hellish place full of madmen? I had thought it courteous to tell them of our impending absence – were they really concerned that Cook was to stay at Blindingham? I had clearly not explained myself properly and determined that I should see them once more before we leave for London.

So this afternoon, after waving Josiah off as he set out for London to secure our rooms for the Winter, I called Jennet and asked him to drive me over to Lydiatt House again. I had a note with me to leave with their maid if they were not at home, but as we turned up their approach I could see them all playing croquet on their upper lawns. I must say, they do seem to like to spend all their time together in a group. I wondered whether they all sleep in a huge bed and take their baths in an oversized bathtub so that they need never be separated for a moment. As Jennet stilled the horse, Mrs Cornbench swept up to me in the same alarming manner she had greeted me with before.

“Oh, my dear Mrs Hatherwick, how lucky we are to see you again so soon! Do you play?” She offered me her mallet but I did not take it. I could not see how to maintain my dignity and aim for a hoop at the same time. I was invited in to take tea and the whole family settled round me as I drank it. Really, I am sure they must be attached to each other by fine cord.

“I am sure you must be wondering what this second visit is concerning, coming so soon as it does after the first,” I began.

“Delighted to see you my dear, couldn’t be soon enough!” said Mr Cornbench, beaming at me. “I was only saying to my wife this morning what a pleasure it was to have met you. We have made your husband’s acquaintance recently, too. He is quite a character, is he not? A memorable man, we thought.” They glanced at each other like naughty children in the schoolroom. I, of course, had no idea they knew Josiah or what he must have done to earn himself such a queer description.

I hardly knew how to continue, but I simply had to explain about poor Cook.

“Mr Hatherwick and I are conscientious employers, Mr Cornbench. We could no more watch a faithful servant suffer than we could pull out our own teeth,” I said.

“Of course you couldn’t, anyone can see you are the most caring of people,” answered he, with a slightly nervous laugh. They looked at each other and then back at me and both smiled as though I had told them a most amusing joke. It occurred to me that they might know more about lunacy than one would have imagined. That would explain why none of them was ever left alone, I suppose.

I told them about Cook’s illness as well as I could and they said they had heard talk in the village a year or so ago about Mrs Everdown finding her collapsed on the Green on more than one occasion. It seems she sometimes became unwell after visiting the ale-house to look for Jennet. This was disturbing news to me, since I had thought she was only ever taken ill at the Hall. And since I do not for one moment believe Jennet to be the sort of man who frequents ale-houses, I can think of no reason why she would expect him to be there. I should not be surprised to discover that the poor woman witnessed some abominable sights in there and was overcome with shock.

As I was digesting this new piece of information, Mrs Cornbench spoke gently to me.

“Mrs Hatherwick, please do not spend a moment of your time in London worrying about what is happening here. As I said before, we are more than happy to visit the Hall regularly to keep watch over your staff. It is no trouble at all to us to help ensure you have an enjoyable Winter. It would be a pleasure, wouldn’t it Arthur?” She touched my sleeve with her tiny little hands and smiled at her husband, again.

After a while I decided we had said enough about the matter. I thanked them for their kind offer and agreed that they would be allowed in whenever they chose to call. I promised to send them our address as soon as I knew it, in case they needed to contact me. Not that anything untoward would happen, they assured me.

As I went to leave the house I passed the open door of a room I assumed was Mr Cornbench’s study. He has an Indian Tea-chest exactly like the one Papa gave me! I did not mention it – to do so would have been an admission that I had been looking too closely into a private room – but I was amazed to learn that there are two such chests in the County. I must mention Mr Cornbench’s name to Papa – perhaps they were travelling in the Indias at the same time – heavens, they may even know of each other! Papa may be able to confirm whether or not Mr Cornbench is as unhinged as he seems…..

Read Effie's diary from the start and then click the link at the bottom of each entry to follow the story in chronological order.
What city, friends, is this?